Introducing yourself to the voters is the most essential part of the election campaign. If they don’t know you well, they just don’t vote for you, and this is where we will help you.

With Facebook limiting ad targeting based on the political preferences of the people, political messaging on these platforms has become extremely tricky.

With our well-crafted digital advertising strategy, we improve your presence online and make people aware of how you can solve their problems.

We are eager to brand your vision to your voters. Once we solidify your digital media strategy, you will be the talk of the town in whichever area you are contesting the election.

Once you and your election campaign have been branded to the voters, potential voters will be attracted to your campaign as they identify with you as their new leader.

We will ensure you get maximum conversion from the first step, as we brand you in a way that generates more leads for you than your competitor.

By gaining new prospects on social media platforms and attracting leads, we will help you inspire your voters to an unmatchable extent.

Once your potential voters have started engaging with you, you have to impress them, as they have the real power to control who wins the election.

We know emotions play a crucial role in conversation marketing, and we help you as a political candidate to hit your voters’ emotions directly, helping you to get the needed votes.

We believe that political advertising should target every segment of voters to drive maximum voter engagement, and this is what we do to elect you.

Political ad spending must be done in a way that maximizes your chances to hit a large chunk of voters with minimum spending.

As digital advertisement strategy brings the most valuable voters to your disposal, valuing them afterward is what we do passionately.

By effectively promoting your policies and manifesto to them, we will create win them for you for the long term, converting them from swing voters into ideological voters.

As these leads would have either registered or downloaded your manifestos by this time, they are more likely to make a decision at this phase, so we will make sure that they vote for you compared to your competitors.

By this time, we have won voters for you. Now, it is time to do voter retention, so you don’t have to convince them again and again in future elections.

We offer continuous engagement with your voters that will develop an unbreakable bond between you and your constituency.

This strategy will help you to win the permanent loyalty of the voters, which is a big win for you.

These voters, now firmly aligned, can also campaign for you in the upcoming elections by volunteering themselves, therefore generating, even more, leads for you.

And we do all of this by constantly measuring the data needed to do so to see the hidden patterns. 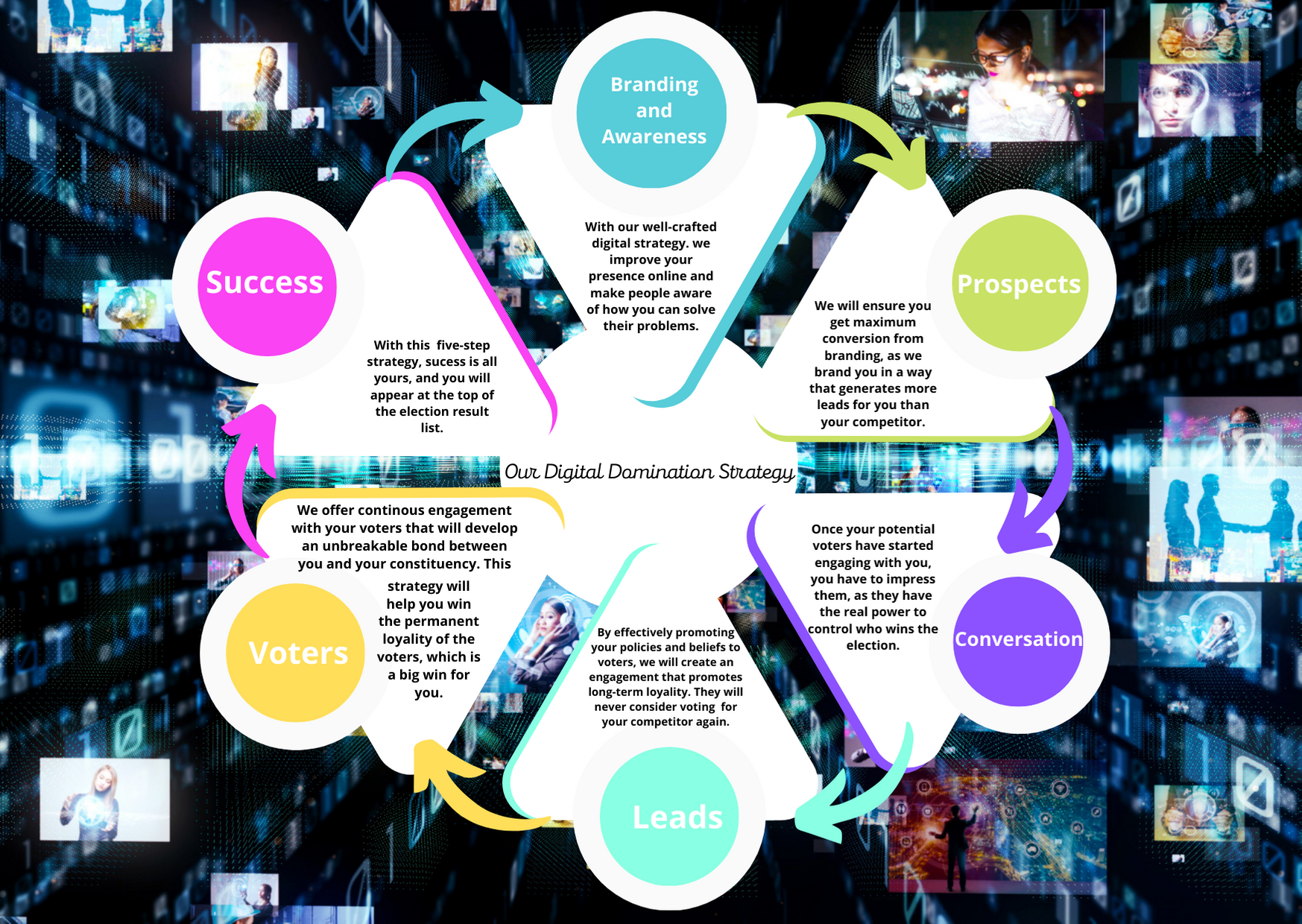 Why You Need Digital Marketing to Win Elections

Promoting a digital election campaign is the best way to win votes from your audience these days. Gone are the days when you had to go door to door to promote your political campaign and visions. Now you can easily do reputation management online to win your next elections.

In such a digitalized world, if you are not caucusing digitally, you do not stand a chance in election cycles.

The truth is that the 21st century is the century of information, and access to this information is made possible only with the use of the Internet.

Imagine a situation of promoting a political campaign in an older, traditional way instead of reaching your targeted audience virtually instantly in a matter of a few clicks with the help of the Internet.

No one would ever prefer wasting so many resources with this traditional way of the caucus.

With the assistance of digital election campaigns, your campaign resources can be more effectively employed in other activities while at the same reaching the broader audience immediately.

Psychologists believe that using graphics is the most efficient way to persuade someone. What about using these graphics digitally to win large voter blocs in the elections?

Launching a digital election campaign will be the best decision you will ever make during your political career.

The credit for the successful reelection of Barack Obama in 2012 for his second White House term goes to his well-organized digital campaign.

The critical fact is that he did not hire politicians to run his campaign; instead, he hired technologists with complete insight into structuring a digital marketing operation.

In a matter of no time, he became a digital sensation, which was a critical factor in eliminating his opponent, Mitt Romney, from the Republican party, out of the race.

In November 2012, the month of the election, Barack Obama was the politician having the highest number of followers on Twitter, reaching 43.7 million followers. Compare this to Mitt Romney, who had a mere following base of 0.7 million on the same platform.

The results were not surprising, considering the digital marketing trends of each of the presidential nominees.

Obama had a vast team of copywriters, designers, developers, psychologists, and digital election campaign managers who developed a well-crafted digital media marketing strategy, helping him with the White House.

And Donald Trump did follow the same path in his 2016 campaign.

Now, with an effective digital marketing election campaign in action, you do not have to worry about going from town to town to spread your message to the voters.

In fact, with a well-organized and properly planned, and executed digital marketing strategy, you can even attract additional voters who might not have voted for you otherwise.

Promoting your narrative to the masses was never this easy. Pursuing voters using a digital marketing election campaign is the cheapest and the most efficient way to win your upcoming elections.

Just imagine a situation where your digital election campaign has gone viral while you are resting at home.

When you see the Internet again, you have become a celebrity, and your chances to win your next election are increased significantly due to one well-crafted digital marketing campaign. This is definitely not an opportunity to miss.

Together, let’s launch a well-thought-out digital election market campaign with PatnuVotes and start getting votes from circles you never thought possible and harness the power of digital to attain your ambitions.