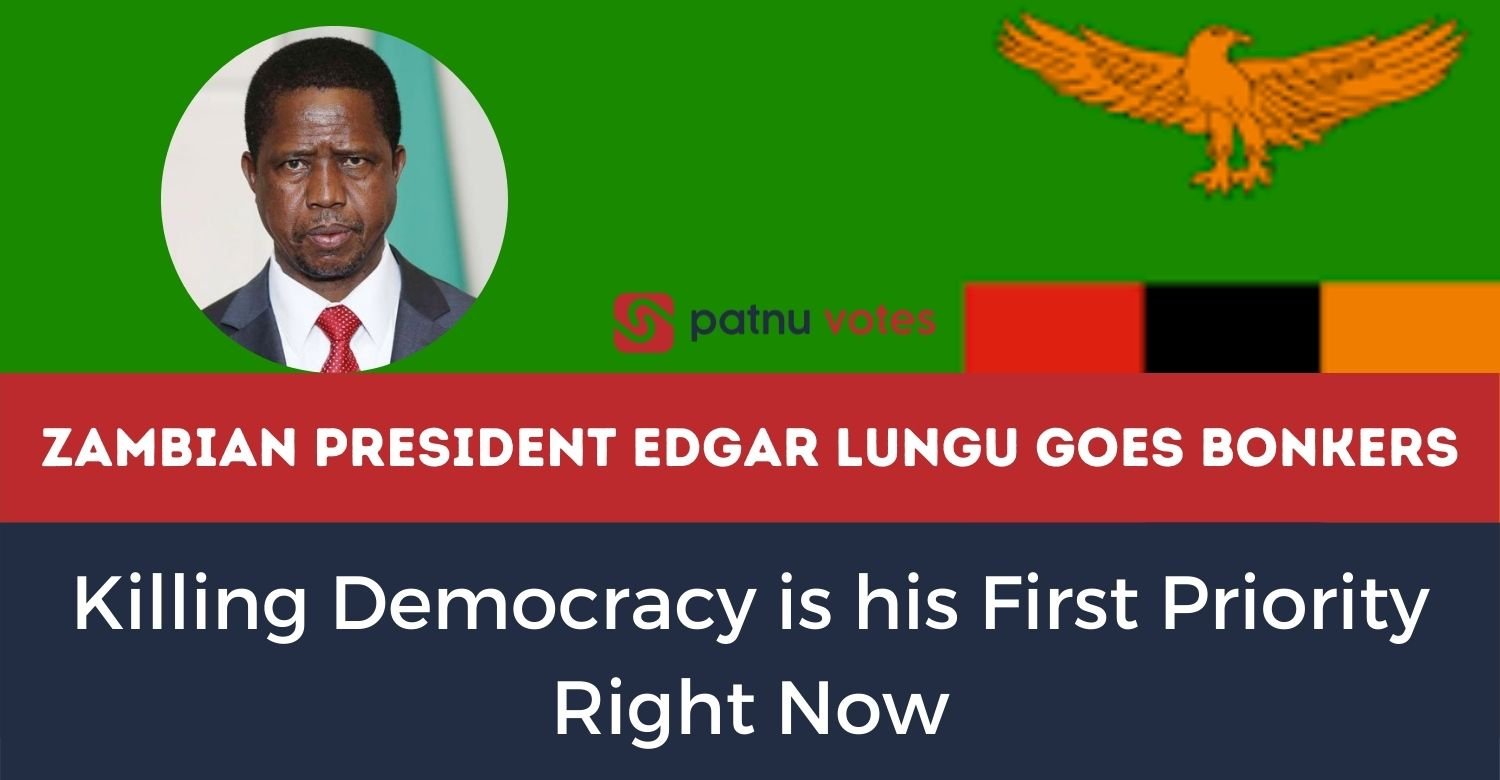 Zambia was once hailed as one of the only working democracies in Africa; however, with time, this success story is now becoming the fastest eroding democracy in the world.

With the weaker legislature and even weaker judiciary, the democratic practices in the country are deteriorating at a rapid pace.

During the presidency of Lungu, Zambia witnessed political interference in the economy, judiciary, media, and freedom of speech.

The voices of the opposition were suppressed many times during his tenure as he observed executing political witch-hunts explicitly.

This autocratic behavior of the PF government owns the full and sole responsibility for shattering the unbiased political institutions of the country that would have been impartial otherwise.

The president is using state institutions and legal power to strengthen his failing regime. His bid to gain non-legitimized ends has pushed Zambia into chaos, furthering the 2021 Zambian election problems.

If Zambia fails to observe free elections, it will create a poor impact on the other African countries as well.

Let's see the issues in the Zambian election and how they could be avoided. 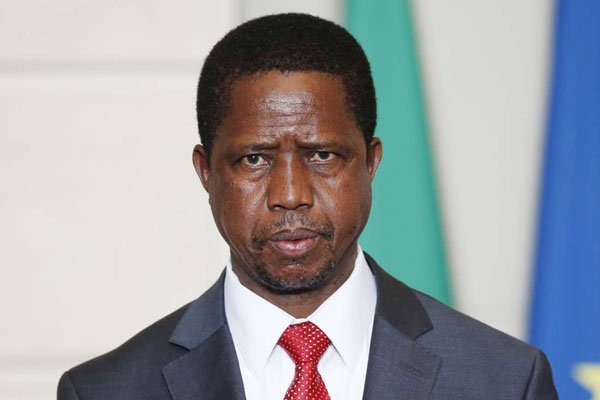 Edgar Lungu in Full Flow to Kill Democracy in the Country

With a sinking economy and sweeping curbs on two important democratic pillars, the media, and judiciary, Zambians are in the doldrums.

Hence, this time he is planning to rig the August election through systematic means.

Lungu knew he could face the worst in the elections, so he decided to play with the constitution. He tried to introduce Bill 10, which could have paved his way to power once again.

However, he failed to garner the support of two-thirds of lawmakers, and the bill was rejected by the legislature.

As he failed to legitimize his illegal ambitions through which experts call a constitutional dictatorship, the opposition parties celebrated.

This is the reason why he endorsed his party's efforts to make this bill null and void.

Edgar Lungu has gone too far in his rigging efforts. It was widely anticipated for a long while that he would tamper with the voters' rolls by creating a new voter registry favorable to his party. He did exactly that.

He has successfully managed to orchestrate the process using the Electoral Commission of Zambia (ECZ).

The ECZ has controversially updated the provisional voters' register, giving Lungu an upper hand in the upcoming elections.

This update has proved the opposition concerns that Lungu is playing ahead of the election, combined with the Electoral Commission.

The chance of an independent audit of the register is also bleak, which is an extremely crucial task to maintain democratic integrity.

The manufacturing of the register is considered the most important task before the election, but only 37 days were allocated for the process.

The consequences of rushing toward the register-making process are severe.

Many eligible voters are now out of the rolls, and no one but Edgar Lungu and the Electoral Commission is responsible for these disenfranchisement efforts.

An in-depth analysis of 2021 voter registration shows some astonishing figures of voter rolls from the Southern and Western regions of Zambia.

According to the voter roll, people from these regions who support the ruling party have been registered for voting while ignoring those voters who are inclined toward opposition parties.

This irregularity is a systematic rigging effort sponsored by Lungu to win power through illegitimate means once again. 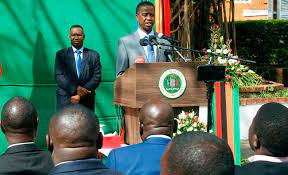 Harassment of Opposition Leaders in Zambian Election: A Below the Belt Attack by Edgar Lungu

In October 2020, the Party for National Development leader Chishimba Kambwii was sentenced to prison for a year on politically motivated charges.

Kambwii was granted bail, but still faces serious charges that could affect his election bid in the upcoming elections.

The police charged the protestors with this action, and two of the protesters were shot down.

Laws against election violence are poorly enforced in Zambia, which increases the risk of electoral fraud, eventually leading to the Lungu Administration using illegal tactics to win the election. 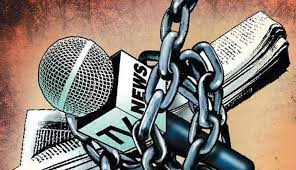 The constitution of Zambia grants freedom of expression and freedom of the press; still, these rights are being suppressed in the country.

The attacks on media channels and journalists, mainly from the PF government, have become a direct threat to democracy in the country.

Free and fair media is essential for democracy flourishing and the conduct of fair elections.

The Independent Broadcasting Authority permanently shut down many news outlets in April 2020 due to a payment clash with the government.

Police and supporters of the Patriotic Front were witnessed clashing with local media and radio networks to stop them from airing interviews of opposition leaders.

Some of the media attacks in Zambia include harassment of Prime TV journalist Jubilee Malambo and the closing down of some of the critical media channels.

Since Edgar Lungu came to power, many channels, including Prime TV, The Post, Muvi TV, and others, were closed for absolutely rubbish reasons by the ruling party.

All of these channels were critical of the government, posing a threat to the illegitimate rule of Edgar Lungu.

Now, when the elections are near, the government can tighten media restrictions further to curb freedom of speech in the country once again.

In fact, restricting media will likely be one of the tools that Lungu will use as a voter suppression tactic.

Recently, the Constitutional Court of Zambia announced a verdict, giving the go-ahead to Zambian President Lungu to seek reelection.

Zambians will cast their vote for the president in August 2021. With the building momentum, the risk of electoral fraud and nationwide rigging is significantly higher.

The Electoral Commission of Zambia is also involved in what seems like pre-poll rigging by creating irregularities in the voter registration on the demands of the ruling party.

The responsibility now falls on the shoulders of the civil society and the public of Zambia to ensure that the 2021 general election will be conducted in a free and fair manner.

The Democratic people of Zambia should knock on the doors of international authorities to demand help and pressure the Lungu government to conduct elections freely.

In this time when media has little to offer to the opposition politicians, candidates knowing the importance of social media in election campaigns can dominate the election, seeing the increasing trend towards non-traditional canvassing in modern times.

Legislators and leaders from opposition parties should mobilize civil society to stage big protests and rallies in the country. Only then can the Lungu government be brought to justice.

The opposition leaders can also use social media platforms amid the rising media curbs to expose Lungu in front of the masses.

Only a collaboration of civil society and the opposition leadership can save Zambia from what seems to be an imminent threat to the democratic practices of the country.

Political Campaigns by Social Media: Biggest Asset of Politicians in the Modern World
Political Action Committees: The Ultimate Guide for Political Donors of the USA